On Sunday September 25, Joris will take us to Belgium again for a ride of about 83 kilometers.

We are going to take a ride through the gently rolling hills of Pajottenland and the Flemish Ardennes, crossing the language border several times to our French-speaking compatriots in Hainaut. 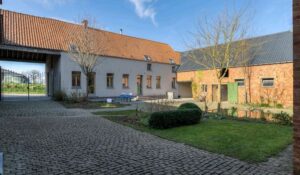 The language border is an imaginary line between the Dutch-speaking community and the French-speaking community. It runs from the French border in the West, right through Belgium, to the German border in the East. It was instituted in 1962/1963, after much political turmoil, and enacted into law after 10-year “language counts”. In addition, the language of a community sometimes simply changed according to preference: in 1940 the city of Enghien (which we will also pass) still had 51% Flemings in 1940 and 11% in 1947. A choice that mainly had to do with collaboration or resistance during the Second World War.

We will gather at 12:00 noon with coffee/tea and mattentaart at a restaurant in Gooik.

Geuze beer is also on the menu at this restaurant. This somewhat bitter beer is typical of the region of Pajottenland and the Senne valley southwest of Brussels. The beer gets its bitter taste through refermentation in the bottle.

Where will we go? 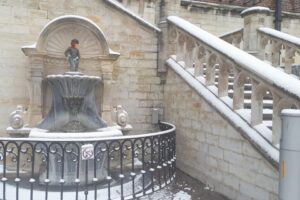 We will leave at 13.00 as usual. After a while we’ll get to the East Flemish Geraardsbergen through the Pajot hills. This city was founded in 1060 because of its strategic location on the border with Brabant, Hainaut and Flanders at that time. Feel free to take your time to visit the lively market with its own Manneken Pis (yes, yes!!!) and the Saint Bartholomew’s Church and visit the beautiful Chapel of Our Lady of the Oudenberg on top of the legendary cycling classic “The Geraardsbergen Wall”. 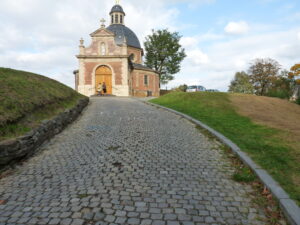 Then we’ll continue towards the French-speaking part of the country and we cross the language border for the first time through protected nature reserves.

By the way, can you guess how many times we will have crossed the language border during this ride?

Characteristic of the region are the many Square Farms that you will pass along the way. And it is equally striking that the Walloon landscape is much less affected by ribbon development. After a while we’ll arrive at the city of Enghien. This city is best known for its production of tapestries, which can be found in castles all over Europe. Here you’ll also visit the park of the castle of Enghien. The photo quiz will  take place here, so take some time to explore this beautiful domain.

Then the language border will be crosssed one last time and again we ‘ll go through the Pajotse hills towards our starting point in Gooik. You are expected there at 6 pm and for the participants who are staying for dinner: that starts at 6:30 pm.

Dinner is a three-course menu consisting of:

main course, with a choice between:

Coffee with cake and ice cream

Making it into a weekend?

If you want to make a weekend of it, you can, but the region is sparsely covered with hotels. There are, however, a number of very pleasant B&Bs. If you still want a hotel, then choose Brussels. The choice is very large there and the Grand Place of Brussels is only 24 kilometers from our departure and arrival point.

What does it cost?

The costs for the day itself are €7 for members and €9 for guests.

Yes, your four-legged friends are welcome, provided they are raised and on a leash.

This event has been registered for the event schedule.

You can register up to and including Sunday 18 September via the registration form.

The GCCC excludes all damages in any form. Photos and videos are also taken during the ride. If you do not appreciate this, you are responsible for this yourself by kindly asking the photographer or videographer not to take pictures of you or your car (number plate). The photos and videos are generally shared on individual participants’ personal Facebook and Instagram pages and the GCCC Facebook page.