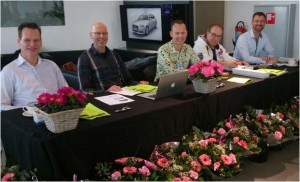 Annually in February GCCC has its Annual General Meeting. On Sunday February 16 our hosts were the Audi Centre in Breda.

Our chairman Mark had organised this meeting to take place in the entresol of the Audi Centre Breda. Mark treated  the 62 members present to delicious rolls  at the occcasion of his birthday. Thanks, Mark, and congrats even now! 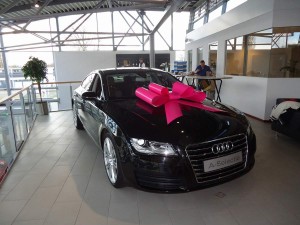 A stylish black Audi supplied with a large pink ribbon was placed next to the board table, which in turn was richly decorated with flowers, kindly supplied by our member/flower seller John.

The catering of snacks and drinks was in the trusted care of Ernst and Piet. Drinks were served from behind the bar by Mark, Paul and John. As you can see, lots of volunteers made this into a very pleasant afternoon.

And the meeting itself?

Of course there was the meeting itself, the reason why we all had gathered there in the first place. At GCCC these meetings are  not at all boring because every page of the powerpoint presentations made by Hans (the editor of our beautiful colourful magazine) was decorated with a handsome athletic man in swimming or underwear. All the usual topics were  dealt with, but also a change in our constitution and rules.

When the time came to put proposals to the vote, there was not a single vote against any of them!

Paul introduced himself as the new editor of the GCCC Facebook page. Paul takes over from Erik, who continues his work for our ‘regular’, much appreciated  website, and has done so, by the way, for 10 years already! After the meeting a few extras were shown. There were images and a video of the events of past year. Also a trailer of a cinema movie based on a successful tv-series of life in the late fifties in Rotterdam ‘Toen was geluk heel gewoon’, soon to be shown in Dutch cinemas. One of our members, another Erik, has provided three of his cars for that. 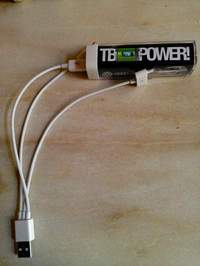 Apart from the three classic cars placed in front of the Audi building by our hosts, there were quite a lot of members’ oldtimers to be seen in the car park too. Our hosts generously provided us with a few gifts, a discount coupon for made-to-measure shoes, a power pack for a smartphone (Apple or Android!) and some liquorice. And on top of that, the plants donated by John were given away to our members too.

Thanks to all who helped to make this a very pleasant day!