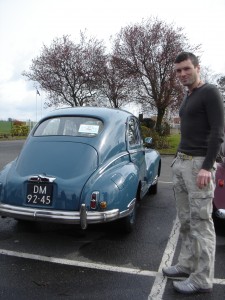 SAINT WITZ (March, 24th, 2008) – The 7th Happy Way by Ledorga was held in the nothern region around Paris. The 112 international participants (not only from Holland, England, Germany and France, but this time also from Italy and Spain!) explored two rather widely divergent sceneries of this region.

The first landscape was found in the Val-d’Oise department and the little town Auvers-sur-Oise. This charming town has become quite famous for the fact that scores of impressionist and neo-impressionist painters (e.g. Vincent van Gogh) have planted their easels in this town towards the end of the 19th Century. 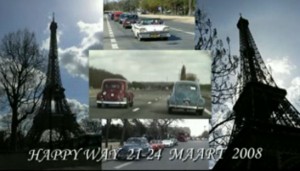 Secondly, we explored a much more urbanized area: Paris! We were very lucky with so many sunny spells during the round tour with our classic cars in the Capital of France. We cruised the city’s famous grand boulevards.

Similar to previous Happy Ways, this rally had also little surprises, challenges and brain-teasers, assuring a pleasant degree of competition among participants. Our Dutch puzzle champion Marc Hesselink and his crew won the first prize.

On Saturday morning, 22 March, the rally started at the hotel and we headed towards Auvers-sur-l’Oise using the lovely country roads of the department of Val-d’Oise. We arrived in the town centre of Auvers-sur-l’Oise and parked at Auvers castle. We discovered many spots that have inspired painters like Daubigny, Corot, Daumier, Pissarro, Cézanne and, of course, Van Gogh. Into the Auvers Castle we had the spectacle tour called “travelling through the impressionist era”. A sound-and-light programme using multiple modern technologies that guide each visitor though the exposition providing not only interesting facts and figures, but also period musical ambiance. 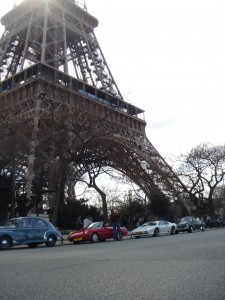 On Sunday 23 March, we drove across Parisian Boulevards and several important Parisian monuments (Champs Elysées, Arc of Triumph, Eiffel Tower, the houses of parliament, the Louvre pyramid). After lunch, we visited the Bourget Museum, dedicated to aviation and space travel. The exhibition was chronologically divided over different halls, starting with the earliest stages of flying, the First World War, the birth of commercial airlines, the Second World War, fighter aircrafts and finally space travel. Furthermore, we had the opportunity to visit a full scale Boeing 747 and visit the special exhibition dedicated to the inevitable Anglo-French aviation adventure, the Concorde.

On Monday 24 March, everybody was free to leave Hotel Mercure in Saint Witz and started their homeward journey. Many many thanks to Dominique, Franck and this Ledorga teamboys, who made this 7th Happy Way a huge success!