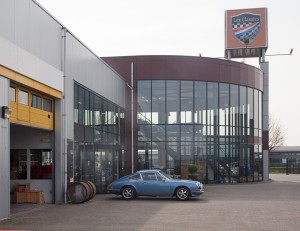 Our annual general meeting was held on February 22, 2015 at Lex Classics in Waalwijk. Most members left their old-timers

at home, but there were some brave ones who defied the brine and grit on the roads.

Favoured by pleasant sunshine members and partner members were welcomed by Marcel en Con. On the ground floor of Lex Classics the coveted 2015 GCCC membership cards were handed out.

While enjoying a cup of coffee and cake there was a lot of chat about last year’s happenings and also about the coming season, all this surrounded by loads of beautifully restored old-timers. Lex has an impressive business with beautiful old-timers, and mostly British at that. Apart from that,Lex has quite a few young-timers in his showroom, a thing that was welcomed by many of our members. Plenty of candy for the eye!

At 13.00h the members were invited to move to the first floor where the meeting was going to take place. Parting president Mark opened the meeting and called upon Lex to tell something about his impressive business. A word of thanks to Lex’s hospitality was expressed, accompanied by a chocolate VW Beetle with our GCCC logo on it. After that the meeting proper started.

During the meeting the regular items were dealt with such as apologies for absence, approval of previous meeting’s minutes, matters concerning membership (dealt with by the secretary Con) and ditto club finances (treasurer Marcel). Events co-coordinator Marchel gave a survey of last year’s events. The website was our next item and a big ‘thank you’ was expressed to its parting moderator Erik who had managed the website for some ten years. He was given a shower radio and some alcoholic beverages. Also mentioned was our Facebook page, which had been set up and also maintained for quite some time by Erik.  The club’s present styling and communication has reached its present high level for a great deal thanks to Erik. The members present showed their appreciation of Erik’s efforts and his speech with a big round of applause.  After that the new Facebook moderator Paul, in a seventies glitter disco outfit, presented his role in that. That was also followed by a big hand of applause. 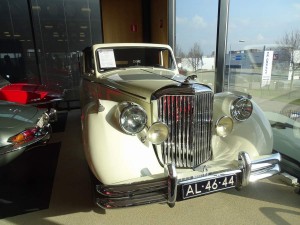 An important part in any club is the financial aspect, and so last year’s figures were dealt with by Marcel. The auditing committee had investigated the club’s finances and had come to the conclusion that all the figures were correct. This was read out in a statement. The 2015 budget was presented, and was approved of by the audience.

Our candidate president Hans D. was asked to introduce himself, and it turned out that he has a lot of experience in such functions. We are fortunate that you are willing to take up this job, Hans!

From 14.50 till 15.15h. there was an interval, time to stretch the legs or have a smoke. Ample time to contemplate if the contents of your piggy bank would be sufficient for one of the cars displayed in Lex’s showroom. Refreshments, provided by Ernst and Piet, could be enjoyed as well as a drink or two. The back upstairs and down to serious business: voting!

Hans’ presidency received all the votes. That was followed by the symbolic handing over from Mark to Hans D. of the president’s gavel. Then Hans V. addressed Mark, in which Mark’s commitment to his function, accompanied by a sharpish tongue was mention

ed. Something Hans had had to get used to was that Mark constantly kept him and the other board members up to scratch.  As token of our gratitude a book was given and also some alcoholic beverages. Consequently it was up to Hans D. to deal with the remaining items to be voted on. Marchel’s continuation was put to the vote, as well as the 2015 budget. All these items received all the votes.

Then it was time for Marchel to outline the 2015 GCCC events and for Aldrin to present the international 2015 events (Ledorga, Eurotour, Bella Italia).

For the magazine Hans V. asked for articles to be written and handed in. After ‘Any Other Bus

iness’ it was time for our new president Hans D. to say a word of thanks accompanied by flowers (provided by John and John), Ernst and Piet (refreshments), Aldrin (international contacts), Paul (Facebook moderator), our host Lex and, last but not least, the board members: Marchel, Marcel, Con and Hans.

The president’s last official duty was to close the meeting (at 15:00h), but after that there was another treat to be had, a compilation film of all 2014 GCCC events, accompanied by disco music.

After a nice glass and a roll it was time for all to go home again, thinking back to a pleasant and rewarding AGM.

Ernst and Piet for taking care of the refreshments

John and John for the flowers

Thanks to all and hoping to see you all at our GCCC events!