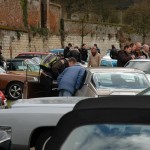 AMIENS (April 6, 2010) – The 8th edition of the Happy Way at Easter was held in the northern region of France, the Somme near the city of Amiens. The general aim of the event remains having an interesting and entertaining weekend in a relaxing atmosphere, organised by Ledorga.

A rally with lots of beautiful classic cars, this time some twin look-a-likes: 2 goldcolored Citroën SM’s and 2 white Peugeot 304 cabriolets. Furthermore 3 Mercedes SL cabriolets and 5 Citroën DS’s. Also some very old classic cars from the marks Rolls Royce, Bentley and Peugeot.During this event the international participants were able to discover less conspicuous aspects of this quite charming part of France.

Just like previous Happy Way rally’s, this event contained some elements of surprise and competition; putting logic and knowledge to the test. All three nights of this event were spent in the Novotel hotel Amiens Est – Boves.

What was the programme on Saturday?

On Saturday 3 April, the rally started at the hotel in the general direction of the Somme River. During the morning drive, we stopped in the town of Saint Riquier, where we had time to visit its lovely abbey, built in the 13th and 14th century. The impressive abbey reflects an era of great religious activity and influence in this area. The morning drive continued in the direction of Crecy-en-Ponthieu, well known for perhaps the most important battle between the French and the English in the 100 year war. Lunch was at the town of Nampont-Saint-Martin.

Ancient steam train
The afternoon drive brought us to the Somme bay and the town of Crotoy, where an ancient steam train let us through different preserved landscapes around the bay. The ancient railroad is nowadays ideal to discover the preserved site of the Somme bay area and allows you to sample the way people travelled some 80 years ago! The train stopped at the historic town Saint-Valérie-sur-Somme and then returned to Crotoy. The rest of the afternoon drive guided us back towards the hotel for dinner, an after dinner drink and chat with each other.

What was the programme on Sunday?

On Sunday 4 April, the morning drive started out in the direction of the city of Naours. Here, we visited the underground town, consisting of over 28 tunnels and 300 rooms where some 2,000 persons could be housed. Lucky no rain in this town 🙂 The underground settlement was used to hide the inhabitants from invaders and occupying forces from the 3rd century until the French Revolution. During World War I and II it was used as a commanding post.

Private collection
The afternoon drive guided towards the town of Albert. Here we saw a unique private collection of over 50 aircrafts, such as Fuga Magister or Mirage III, the last Caravelle of Air France and a Dakota C47, that has served on D-day during the invasion of Normandy in June 1944.

Battle at the Somme
The drive continued in the direction of the upper Somme area, where the exceptionally ferocious battles of World War I, specifically the battles at the Somme River in 1916, have left indelibly marked the landscape (the upper Somme area has for the United Kingdom and its Commonwealth Army the same meaning as Verdun for the French). We passed for instance the Lochnagar Crater, an impressive hole, dug by a mine, of some 100 meters wide and some 20 meters deep. This crater has marked the start of the Somme battle for the British troops on 1 July 1916.

Terre Neuve
We also saw Terre Neuve memorial; particularly impressive by the preserved battlefield and trenches, ploughed by bombs and Thiepval with its tall monument of 45 meter high. The return drive to Amiens passed us through the upper Somme valley and its numerous little bays and lakes, laced with nice vistas on this rather rough part of the countryside. Dinner was served at the hotel Novotel Amiens, followed by the price giving ceremony of 41 price winners.

On Monday 5 April, everybody kissed goodbye after their breakfast and some of them discovered more of the Somme area.